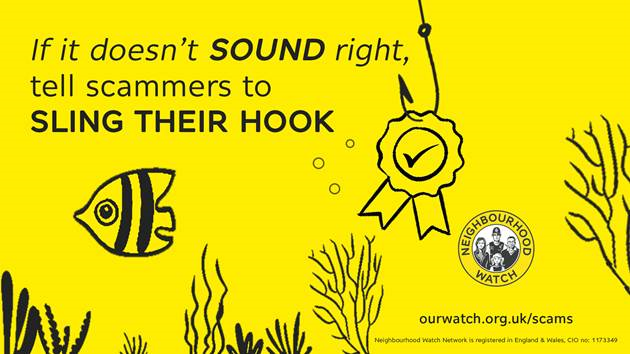 WHY ‘SLING YOUR HOOK’?

The campaign taps into the psychology that scammers use to hook people in, helping you stay one step ahead and protect yourself and your loved ones against the increasing variety of scams happening every day. We’ve identified the following five behaviours scammers commonly use:

We also know that often victims of scams report that in hindsight they felt something wasn’t quite right at the time.  This campaign aims to raise awareness of the tactics scammers use and encourages people to ‘stop and think’ if something doesn’t FEEL, SEEM, LOOK or SOUND right.  This allows them time to trust your gut instinct and help prevent becoming a scam victim.

“Everyone likes to feel special. But watch out! If a stranger is going out of their way for you, something fishy may be going on instead. Scammers like to offer one-off deals and favours. Don’t be afraid to tell them no.” John Hayward-Cripps, CEO of Neighbourhood Watch Network.