The Annual Footpath Survey was undertaken over three days, Sunday 29th December,Sunday 5th January and Monday 13th January, covering a total of 20.6 miles. This was not a good time to check the paths as it followed heavy rainfalls and flooding. The walking made worse because on the first day I chose walking boots and gaiters rather than wellington boots! Wellington boots have been used since!

As mentioned last month the signs for the temporary path HO1 through Hereford Point have all either faded or disappeared. 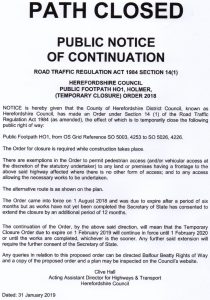 We will need to maintain contact with Welsh Water/Balfour Beatty to find out what is holding up reinstatement of the path along its correct line. 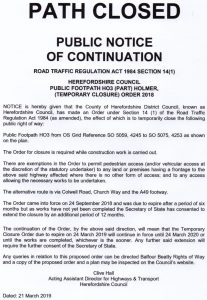 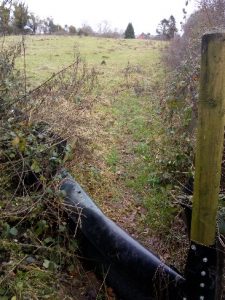 This Holmer & Shelwick footpath has the widest range of views. It starts from Coldwells Road near Highfield House and runs roughly north to a top stileat SO 509 433where it links with Pipe and Lyde footpaths PL1 and PL2. Most of the path is through grassy pastures but the top field is arable and can be muddy at present.

This is atarmacked footpath that runs west to east through The Furlongs from Attwood Lane to Munstone Road. It was walked on Monday 13th January at which time the most notable and disturbing point was the disgusting sight of a litter bin overflowing with dog poo bags right by the children’s play area. 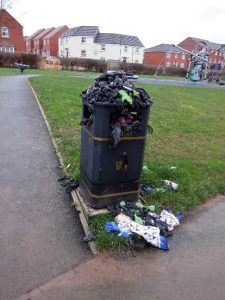 Runs south from Attwood Lane down to the Roman Road. It gets overgrown very quickly in the warmer months and is often muddy and running with water.

H08A is in two parts. First from Attwood Lane (by Holmer Court Care Home) east to The Furlongs estate and then north up to the Secret Garden pub. On the day of the survey the first and last parts of the path were extremely muddy.

Starts from the C1127 road at SO 515 429, near Ivydene, and runs roughly north east to join Patch Hill lane and then through fields round the north of Shelwick, finally bending south east to Shelwick Lane at SO 524 431.  Near this corner the path is very muddy.

The final narrow section between a fence and a ditch (see picture) gets very overgrown in the warmer months and needs to be walked with care. 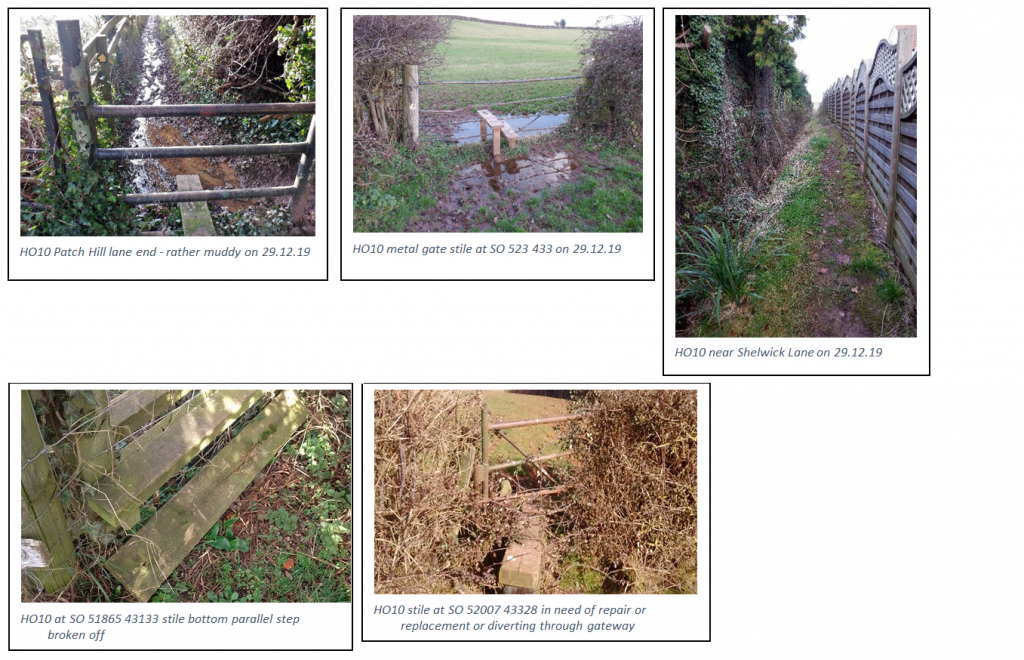 Stretches ENE from Munstone Road (south of the Munstone crossroads) through to Shelwick Lane near the railway bridge, close to the C1125 Sutton St Nicholas road. At present the path across the initial arable fields is quite walkable. The most challenging parts are at stiles and gateways where pools of muddy water are very slow draining. 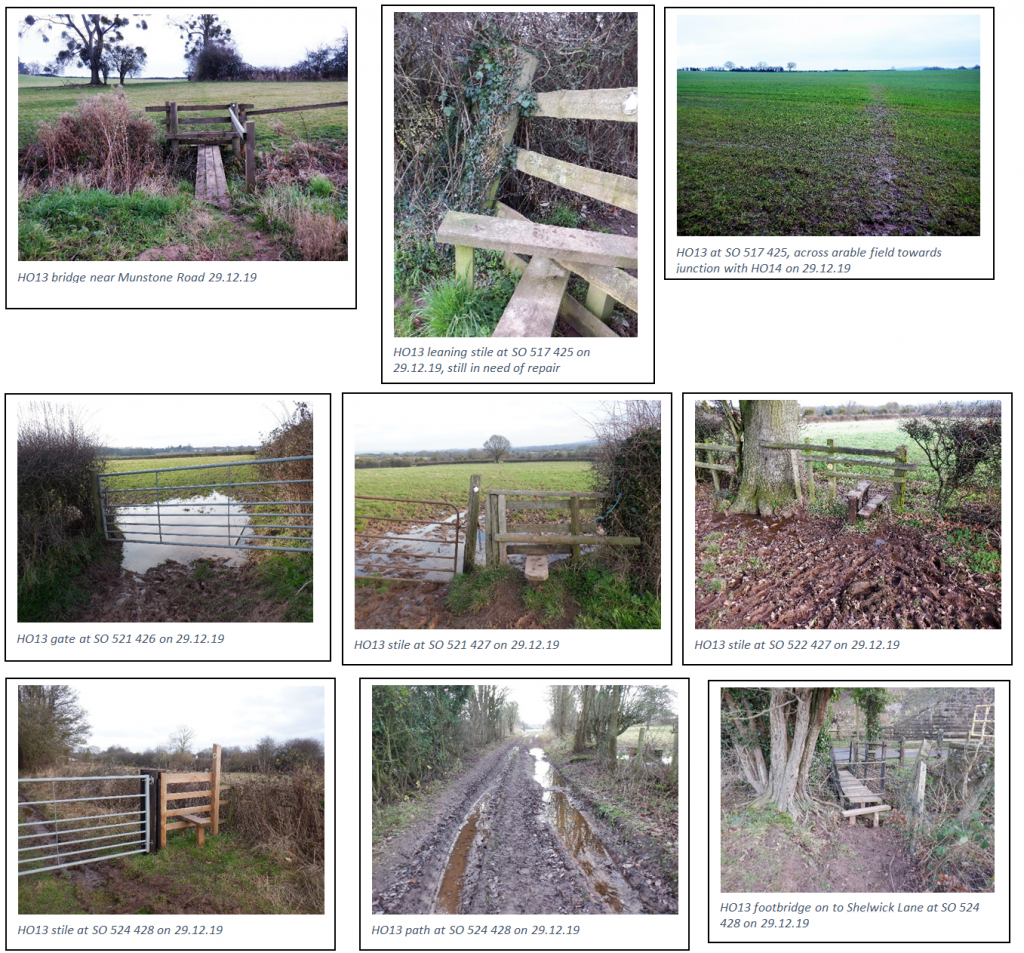 Starts at some steps off Shelwick Lane (close to the Patch Hill lane) and follows a hedge line roughly SSE to join footpath HO13 and then continue SSE across fields to a railway bridge near Burcott Farm. The right of way finishes at the railway bridge and if you wish to continue down the track, past Burcott Farm, to the Roman Road permission should be sought from the farm. 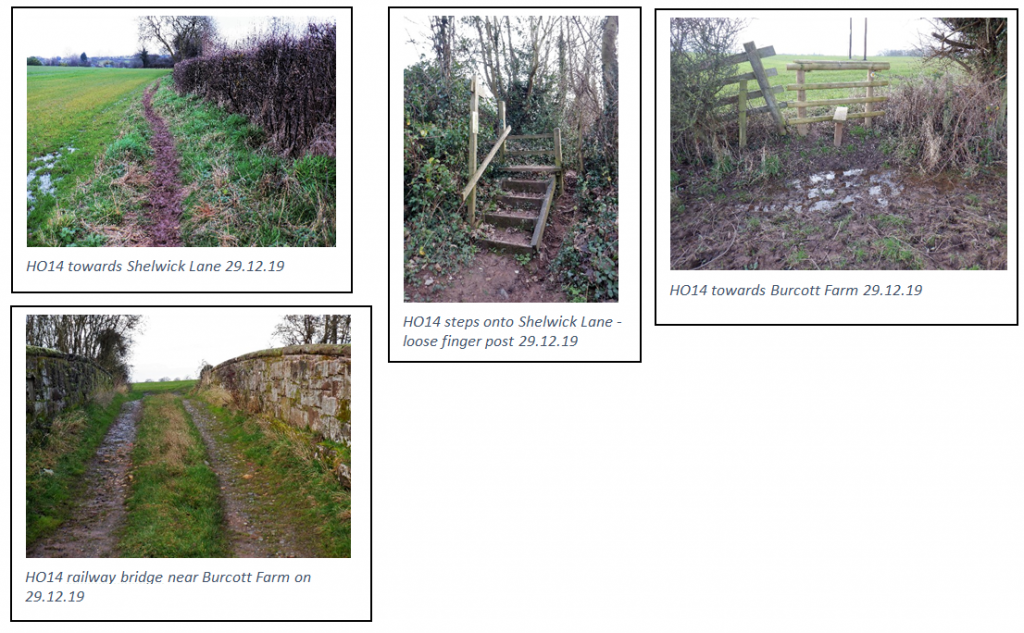 Starts as a continuation of Shelwick Lane in Shelwick Green and continues eastward through a kissing gate across a very churned up area of pasture to a dead end near the River Lugg. When walked on 29th December the path was blocked by flood water

This path starts in Shelwick Green from just east of the HO15 kissing gate and follows a SSE direction across a pasture to the railway line, continues across the rail track in a SSW direction until it changes direction again at SO 530 426 and becomes the HO17.

Starts at the junction with HO16 at SO 530 426 and follows a roughly SE direction to the River Lugg and then takes a southerly route to some steps up to the Roman Road, near the Lugg Bridge. When walked on 29th December 2019 much of the path near the Lugg was under water and a creative route had to be followed to get to the Roman Road. This had not improved much when it was re-walked on 13th January 2020. 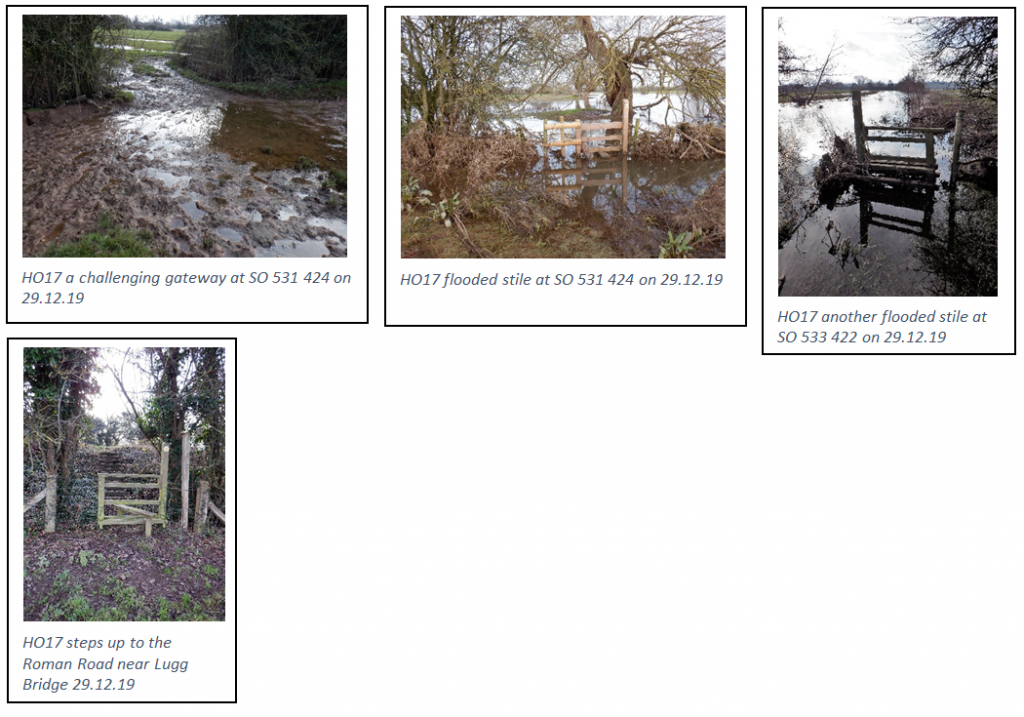 Bridleway HO18 southern end is just to the east of Lugg Bridge and it then goes NNE towards Sutton St Nicholas as far as the parish boundary where it changes to have first Eau Withington and then Sutton St Nicholas designations. There is also a branch bridleway to Eau Withington. When visited on 29th December it quickly became unwalkable due to extensive flooding. That had reduced by 13th January. 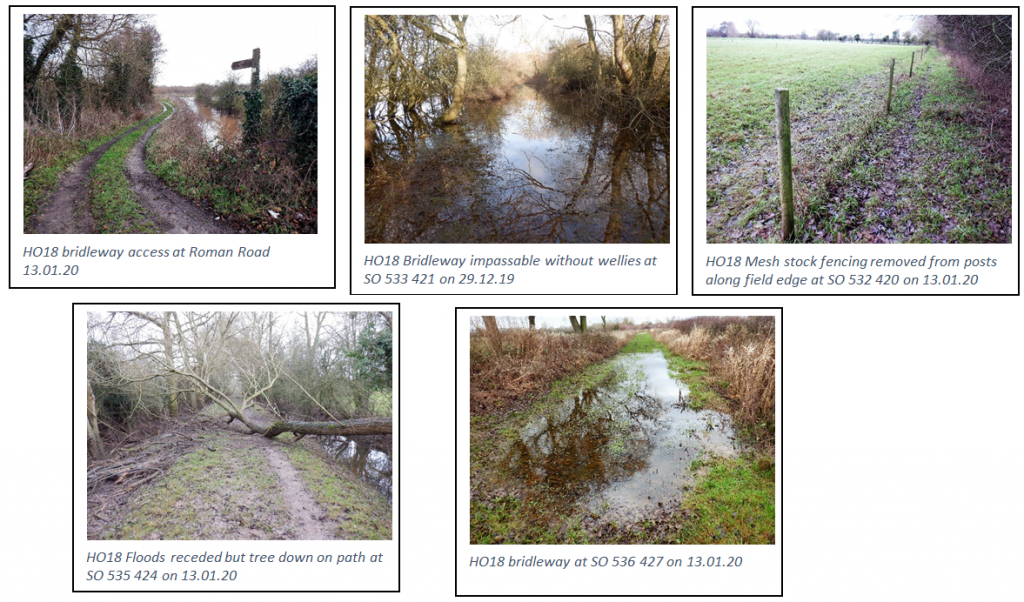