Firstly, my thanks to our Shelwick Parish Councillor who has made good use of the parish hedge cutter to tidy up paths in the Shelwick area – very much appreciated.

Second, thanks are also due to the team that has already made a big impact on clearing weeds and vegetation in and round the Coldwells pond close to the start of path HO3.

Last month there was concern a temporary stile that had been created at the end of Avocet Road on Hereford Point. Bloor Homes have corrected that and the new stile has a proper cross-step at a height that is easy and safe to use. Thank you, Bloor Homes, for reacting so quickly to our comments.

At the last meeting the Ward Councillor raised concerns from a parishioner about the state of Parish Footpath HO8 between Roman Road and Attwood Lane (nettles, brambles etc). I strimmed the path on Monday 13th September and, hopefully, that has resolved the issue. It also unearthed a quantity of dog poo bags in the 30 yards nearest to Attwood Lane.

I refuse to move poo bags now and hope the sight of them will shame the offending owner(s) to clear up the mess! The pictures show just a few of those left along the path. 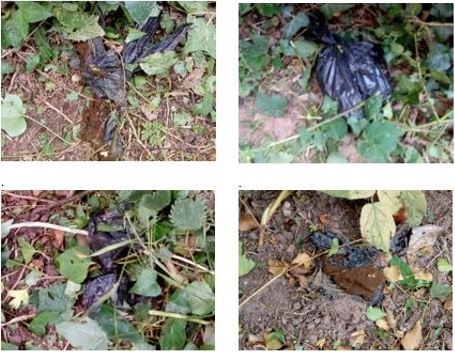 A further 0.3 miles was walked, revisiting path HO9 at the back of White House Farm, on 3rd October to strim back brambles and nettles. 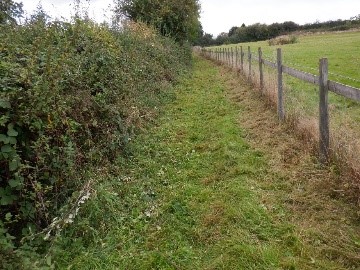 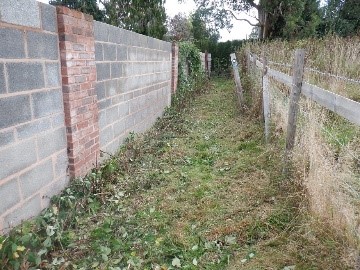 On Tuesday 5th October 6.8 miles was walked on paths HO8A, HO6, HO13, HO15, HO16, HO17 and Bridleway HO18.  The main purpose was to check the extent of work still required on the remainder of the Bridleway. It was planned to complete this work on Saturday 9th October.

Since the recent rainfalls pools have formed again in gateways and by some stiles. Waterproof boots come in handy now!

This stile was reported on the Herefordshire Council website and has been allocated Balfour Beatty Ref:11111239

Saturday 9th October 2.3 miles walked to strim the remainder of Bridleway HO18. I walked straight to the above way marker post, strimmed round it, replaced faded way marks and then headed back towards the Lugg Bridge strimming as required.